Eros and Logos ~ The Energies of Relationship

Eros is LOVE energy – not just sexual energy. Eros in philosophy and psychology is used in this
wider sense, as an equivalent to "life energy."


In Carl Jung's analytical psychology, the counterpart to Eros is Logos, a Greek term for the principle of rationality. Jung considers Logos to be a masculine principle, while Eros is a feminine principle. According to Jung:


“Woman’s psychology is founded on the principle of Eros, the great binder and loosener, whereas from ancient times the ruling principle ascribed to man is Logos. The concept of Eros could be expressed in modern terms as psychic relatedness, and that of Logos as objective interest.”
Aspects of the Feminine, Press, 1982, p. 65.


What happens when our notion of God as psychic relatedness is tossed out the window for a dominant idea of objective interest?


With every reconciliation of opposing forces or views, something new is created.  The relationship between two is - in and of itself- an entity. "Wherever two or more are gathered, there am I also..." Between the human, Jesus, and God, the Christ is the new entity (or at least our realization of the Christ is new). Christ exists for every human relationship with God. And Christ is realized through the path of LOVE, by accepting an identity of LOVE for yourself, just as Jesus accepted LOVE as his identity. When we become psychically related to God as LOVE, then we can act – we can have objective interest - in the world as LOVERS.


"Love God. Love your neighbor as yourself. Love your enemy." These Loves are the reconciling force for humanity. If you practice these Loves in extraordinary humility, both inner love and active outer love, you will attain the "mind of Christ" the divine relationship through which God and man are reconciled.


Eros and Logos, yin and yang, being and doing, inner essence and outer expression, let LOVE be who you are and what you do….this is the mantra of all religions, in the words of each unique culture.

Notes on the origins of Eros and Logos (from Wikipedia)


Eros (/ˈɪərɒs/ or US /ˈɛrɒs/; Ancient Greek: Ἔρως, "Desire"), in Greek mythology, was the Greek god of love. His Roman counterpart was Cupid[2] ("desire"). Some myths make him a primordial god, while in other myths, he is the son of Aphrodite.

According to Hesiod (c. 700 BC), one of the most ancient of all Greek sources, Eros was a primordial god, that is, he had no parents. He was the fourth god to come into existence, coming after Chaos, Gaia (the Earth), and Tartarus (the Abyss or the Underworld).[5]

Parmenides (c. 400 BC), one of the pre-socratic philosophers, makes Eros the first of all the gods to come into existence.[6]

The Orphic and Eleusinian Mysteries featured Eros as a very original god, but not quite primordial, since he was the child of Night (Nyx).[3] Aristophanes (c. 400 BC), influenced by Orphism, relates the birth of Eros and then of the entire human race:

At the beginning there was only Chaos, Night (Nyx), Darkness (Erebus), and the Abyss (Tartarus). Earth, the Air and Heaven had no existence. Firstly, blackwinged Night laid a germless egg in the bosom of the infinite deeps of Darkness, and from this, after the revolution of long ages, sprang the graceful Love (Eros) with his glittering golden wings, swift as the whirlwinds of the tempest. He mated in the deep Abyss with dark Chaos, winged like himself, and thus hatched forth our race, which was the first to see the light.
Posted by ecumenicus at 6:53 AM 1 comment: 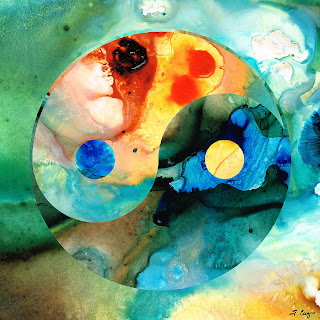 I have recently been meditating on kataphatic and apophatic perception - active and passive ways of seeing/describing an experience. What it "is" and what it "is not." These terms are used in Christian literature to describe approaches to union with God.

The concept of active force and passive force exists in many applications and cultures. Hegel's thesis - antithesis - synthesis; Gurdjieff's law of three...and the ancient Chinese idea of yin-yang.

Yin is characterized as slow, soft, yielding, diffuse, cold, wet, and passive; and is associated with water, earth, the moon, femininity and nighttime. (formless, receptivity)

Yang, is fast, hard, solid, focused, hot, dry, and aggressive; and is associated with fire, sky, the sun, masculinity and daytime. (form, causality)

Yin and yang thus are always opposite and equal qualities. The potential for each exists within the other. Thus, they transform each other. A one is receding the other is becoming, like an undertow in the ocean, every advance is complemented by a retreat, and every rise transforms into a fall. The interaction of the two gives birth to things. whenever one quality reaches its peak, it will naturally begin to transform into the opposite quality: for example, grain that reaches its full height in summer (fully yang) will produce seeds and die back in winter (fully yin) in an endless cycle.