“The wise man is one who knows what he does not know.”
~Tao Te Ching, 5th Century BCE

He (God) exists in a superessential mode and is known beyond all understanding only in so far as he is utterly unknown and does not exist at all. And it is that perfect unknowing, taken in the best sense of the word, that constitutes the true knowing of him who transcends all knowing.
~Dionysius the Areopagite, Letter I to Gaius (PG3,1o6s) 5th-6th century CE

This knowledge by unknowing
Is such a soaring force
That scholars argue long
But never leave the ground.
Their reason always fails the source:
To understand unknowing,
All reason now transcended.
~ St John of the Cross, excerpt: I Entered Where I Did Not Know, 1542 – 1591

“The intuitive mind (the mind that experiences the "unknown") is a sacred gift and the rational mind (the mind of knowing) is a faithful servant. We have created a society that honors the servant and has forgotten the gift.”   ~Einstein paraphrased by Bob Samples

Hildegard of Bingen - Man in Sapphire Blue or The Trinity: A Study in Compassion. 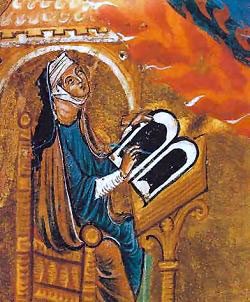 In a very general, cultural (patriarchal) sense, male and female consciousness express themselves respectively as active and receptive, yang and yin, objective/logic and subjective/relational. While these biases commonly express in social roles along gender lines, it is important to note that all men and all women have BOTH styles of consciousness and they compliment each other.

This mystical-intuitive perspective is found in the writings and visions of Hildegard of Bingen, a 12th century German Benedictine abbess, writer, composer, philosopher, visionary, healer, administrator and, as of October 2012, Dr of the Roman Catholic Church.

In Hildegard's time, it was traditional in women’s religious orders, to describe Divinity as a circle or a circle in motion, as a spiral. Hildegard writes: “A wheel was shown to me, wonderful to behold…Divinity is in its omniscience and omnipotence like a wheel, a circle, a whole that can neither be understood, nor divided, no begun, nor ended”  She continues, “Just as a circle embraces all that is within it, so does the Godhead embrace all.” The circular imagery is deeply maternal. “Godhead” is feminine in both German and Latin, and is an all-embracing name for divinity. 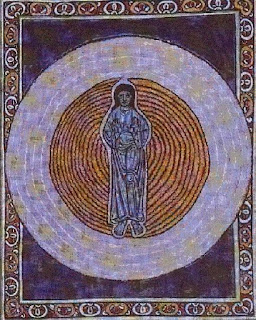 Hildegard describes: “A most quiet light and in it burning with flashing fire the form of a man in sapphire blue.”  The blue colors and the manner in which the man holds out his hands, extended toward the world, denote compassion and healing. Hildegard describes the Trinity as “One light, three persons, One God. The Father is brightness and the brightness has a flashing forth and in the flashing forth is fire and these three are one.” The Father is a living light, the Son, a flash of light and the Spirit is fire.. The fire of the Holy spirit binds all things together, illustrated as an energy field surrounding the man. Symbolized as the golden cord of the universe, the Holy Spirit streams through eternity creating a web of interconnectivity of all being and of divinity with creation and humanity (reminiscent of an East Indian cosmology using cord and thread imagery).

Hildegard’s theology of Trinity is about divine compassion entering the world. Jesus the Christ is the revelation of the compassion of God, the incarnation of divine compassion. The Hebrew word for Womb is compassion. But we do not merely look at a mandala (ancient circular image of the universe) – we are transformed by it. This mandala draws us into the energy of divine compassion, it connects us with the Christ, the Blue Man, such that we realize our own identity in Him who is the compassion for the universe.  If we don't hold our healing capacity in unity, the entire rope (universe) unravels. The aperture on the man's head is likened to the 7th Chakra, the crown chakra, that connects individual awareness with universal awareness.

May the words and visions of Hildegard speak to your sense of divine receptivity. And may you wonder with reverence at the precious gift of this amazing, sacred cosmos and our Oneness with all of Life.

...all of these refer to the ability to merge relative with absolute...all "things," all concepts with no thing and no concept. Particles with waves.

Of course we cannot forget concepts and things, we live in that objective reality; our mind has evolved to perceive particles/things/concepts. Our language snatches them out of endless possibility and offers them up for everyone to consider.

But the greater reality is that which precedes objectification, the Kairos...the eternity of the subjective, the possibility of that which cannot be named without limiting. Unknown is always greater than Known.

G_d, the breath of Yahweh...Allah...these are spoken symbols of the sound of our breathing, not objectified designators of some mental concept. These are the sound of Spirit - the sacred no thing and everything. Breath of Life.

Where do we find this no thing? Look within and everything without will be understood.

Be
Still
Know
I
Am

_/\_Peggy at Ecumenicus
Posted by ecumenicus at 6:25 AM No comments: 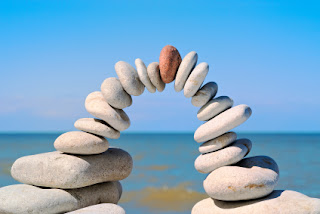 Meditation or contemplative practice, such as centering prayer, is a practice of receptivity. To enter the space of pure being, we must change (for the time of meditation) our fundamental relationship with the outer world from one of action and expression to one of receptivity and openness. We shift perception to "What Is" as it is. "Not mine, but Thy will be done." is the Christian language for this posture of mind.

In Christian thought, to enter into the flow of divine grace, one must assume a mental posture of humility, meaning that one must relinquish both external identity attachments and the false sense of control they give us, and be with circumstances as they are, trusting God to carry us. This posture of receptivity is referred to as kenosis, self emptying. It is releasing the illusions imparted by ego: separation, attachment, neediness for power and control, for affection and esteem, in favor of trust, truth and authenticity. When we can learn to make this change of mind in  meditation, from active control to passive receptivity,  we are better able to bring our peaceful presence to times of active engagement with the outer world. This is the objective of meditation or contemplation: to exercise the mind in the way of receptivity so that as we live in the world, it is engaged in receptivity in a balance with its engagement in activity.

"There is no better protection than the refuge of unbounded sacred space, infinite awareness, and genuine warmth. With the inner refuge, you are not depending on someone or something outside you to make you feel secure. Any external source of refuge is ultimately unreliable.

OPEN. The first refuge, unbounded sacred space, is a true support because it is unchanging, indestructible, beyond birth and death, and eternal. Whatever difficulties you face, the first refuge supports you in allowing your experiences and hosting them fully.

AWARENESS. The second inner refuge, the light of awareness, can never be diminished or extinguished by any cause or condition. Inner light is unceasing—forever luminous and clear. Even in the darkest of circumstances, you can trust that it is always there.

PURE BEING.  You can also trust that the warmth of the third refuge is within you. It spontaneously arises from the union of openness and awareness. There may be moments when you feel emotionally cold and dark, when it seems that all the light has gone from your life. But your experience and inner truth are not in sync—the light is always there. At these moments, access to the inner refuge may seem distant, but a sense of trust may bring you a glimmer of the inner refuge that can lead to a shift in the darkness of your experience. Trust is a necessary companion on the path.
There is no situation so bad that you can't turn toward the three doors. As you become more familiar with entering and abiding in the inner refuge, you will begin to trust in its healing presence.

Being aware of the three doors is not work. In fact, the more effort you put into connecting with stillness, silence, and spaciousness, the more elusive the inner refuge seems. Connecting with the inner refuge is simply a matter of shifting your attention. If you are already still, be aware of stillness. When you are silent, hear the silence that is already there. Notice the spaciousness at the very center of your being. As you rest in awareness, you connect with your authentic self. The effort of seeking dissipates, and you are unbounded sacred space, infinite awareness, and genuine warmth—you are the inner refuge. The inner sacred space is so simple and close that if we search for it, we cannot find it. But it is always there for you, the source of all the elemental qualities you need. As the inner refuge, you are whole and complete in each moment."
~Tenzin Wangyal
Adapted from Tricycle .  Originally From The True Source of Healing, by Tenzin Wangyal Rinpoche (July 7, 2015). Reprinted with permission of Hay House.

Christian contemplative theology informs us that the first endeavor on the path to union with God is purgation. This is the process of opening, the removal of ego-defenses that keep us from a state of humble, loving acceptance; the psychological barriers to truth and grace. The second phase of the spiritual path is illumination, the same as awareness, described above as a light that is always on. Finally, union with God is akin to Pure Being, an experience of Oneness with the Divine finds us in the light of our own Pure Being.

May you be refined by the solitude of the open waters of grace, breathed through by the Spirit of light and love, and expanded into the open arms of Pure Oneness. It is from this Space that you can bring the highest healing to the world.

Posted by ecumenicus at 3:39 AM No comments: