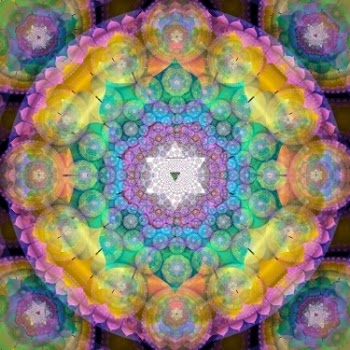 "What we call truth lies in the rational harmony between the subjective and objective aspects of reality, both of which belong to the super-personal man."

The composition of a table is atoms - protons and electrons, moving energies and alot of space - more space than density. We ascribe a reality independent of our self to the table, yet, it is our mind that conjures the solid table (objective) from a subjective understanding that there is a table. "The table which I perceive is perceptible by the same kind of consciousness which I possess."

"In the apprehension of truth there is an eternal conflict between the universal human mind and the same mind confined in the individual."

~Rabindranath Tagore in a conversation with Albert Einstein on the nature of the universe July 14, 1930, In Parabola, Spring 2014

Truth is always relative when we are speaking of form, whether form is thoughts, objects or circumstances to which our thoughts are drawn. In the human objective mind, truth is always relative and there are an infinite number of relative truths. Absolute Truth, Ultimate Reality (which Christians call God and Hindus call Brahman) contains all relative truths and will never be defined, or else it would also be relative. Because there are infinite relative truths when energy is resolved to matter by the mind, change is a constant. All of life, as we perceive it, is change. The enlightened mind (Tagore's "super-personal man") can rest beyond relative truth, if it is capable of setting aside the process of making forms - thoughts, ideas, and objects, and simply allows itself to be still. We can connect with that which is beyond relative truth. ~Peggy

I published an article several years ago, the perspectives I stand by still. It's at:     http://www.youthworker.com/youth-pastor-jobs-training/11553880/

Posted by ecumenicus at 6:29 AM No comments:

The Eye ("I") Sees All Directions 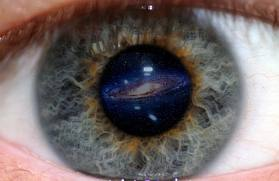 The mystical way of perceiving is nondual. That is, the mystic can perceive difference and sameness, or any paradox, at the same time. This viewpoint is on one hand, a complete release of  either/or judgment and can also be an experience of myself as the object of my perception and the object of my perception as myself. In order to behold an object as myself, I have to relinquish my separate identity and realize oneness with the other. This, again, is done by releasing the judgment that there is a difference between us. The active intelligence does not release judgment. The passive or receptive intelligence does. There are many ways to say this. Thought is active, intuition is passive. We use our sensing/thinking (Myers Briggs) to perceive and analyze factual information. We use intuiting and feeling (Myers Briggs) to add memory experience to those facts. To experience nonduality as a mystic does, one must move conscious thought and memory aside in favor of mental quietude. One must move psychically beyond thought and through any inner feeling or intuition that prevents simply being still. It is in that stillness that one can realize one's self as no thing and everything.

Mystics (those who are adept at using the full benefit of their human perceiving functions) over the ages have understood reality as One. This is reflected in every religious tradition the thought process can conjure. Although it is not practiced by a majority of sensor/thinker intellectuals, or sensor/feeler emotional separatists.

Father Thomas Keating, a Benedictine and Christian contemplative, speaks of the spiritual journey this way:

It is true that perception holds the key to what we call "Reality." The relationship between who I am and who God is, my relationship with other created ("originated") elements is completely dependent on my point(s) of view, the limitations of my thinking and intuitive/emotional memory.

This morning in my reading, I found an interesting coincidence of Christian and Sufi mysticism from the 12th-13thc, with regard to perception/vision/the eye. Below are two quotations, one by a Christian and the other by a Sufi, describing the perception of myself as Other and Other as myself.

~~~*~~~*~~~*~~~*~~~
In the final part of this hymnic opening to Ring Settings of Wisdom, Ibn Arabi introduces a key pun on the world insān, which can mean both “human being and “pupil of the eye.” The complete human is the pupil of the eye of reality, the mode of perception. As khalifa or regent, it is also the “seal” by which the order of reality in maintained. Were it to be removed, the articulated world would collapse in upon itself:

That one was named insān (human being, pupil of eye) and khalifa (regent)

Buddhists would call this the journey into Awareness, while monotheists contextualize it as "Union with God ('The Other')," and Hindus might call it Moksha. It is the spiritual journey of a human mind toward realizing her mental potential. It is the process of enlightened consciousness.

And we all, who with unveiled faces contemplate the Lord's glory, are being transformed into his image with ever-increasing glory, which comes from the Lord, who is the Spirit. 2 Corinthians 3:18

With a prayer for reconciliation and peace, Peggy

Ibn Arabi:July 28, 1165 – November 10, 1240) was an Arab Andalusian Sufi mystic and philosopher. He is renowned by some practitioners of Sufism as "the greatest master" and also as a genuine saint.

Meister Eckhart (1260 – c. 1327), commonly was a German Dominican theologian, philosopher and mystic.
Posted by ecumenicus at 9:08 AM No comments:

The Gifts of the Magi

Matthew 2:1,2 After Jesus was born in in Judea, during the time of King Herod, Magi from the east came to and asked, "Where is the one who has been born king of the Jews? We saw his star in the east and have come to worship him." 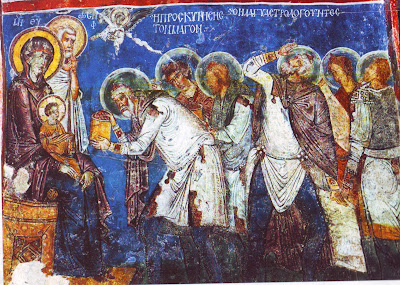 The Christian celebration of epiphany involves the travels of 3 wise men- commonly thought to be scholars/astronomers (recently a newly translated Syriac text –The Revelation of the Magi” identifies the magi as “Those who pray in silence.”) Most significantly, these men were not Jews or Christians, they were gentiles; people from outside of the Hebrew culture who were searching for a miracle. Not material wealth or intellectual status, they had that. These men understood the poverty of their souls and sought, with all earnest and amazing perseverance, to find the promised riches of new life.


Matthew 2: 9-11 After they had heard the king, they went on their way, and the star they had seen in the east went ahead of them until it stopped over the place where the child was. On coming to the house, they saw the child with his mother Mary, and they bowed down and worshiped him. Then they opened their treasures and presented him with gifts of gold and of incense and of myrrh.


Gold: incorruptible immortal precious metal of the sun, symbol of divinity and royalty,
Frankincense: Exotic resin of divine communication and healing, and
Myrrh: in Arabic called “bitter”, the sweet resin of tears for healing and anointing, in life as at death, a symbol of fragile humanity.


But whenever a gift is given, a gift is received. And on this 12th night, it was the magi who received a gift. They received the gift of an epiphany – the remembrance of a truth they had always known:  That God is revealed to the hopeful, the faithful, to those who have time to see. Here in a manger they found the Christ child, and in Him they saw a new light; a light that was reflected in their own hearts, a light for everyone – the light of the world.


And so it was that the magi came to find the Christ child and became truly wealthy, for they discovered the light of the world, the gift of truth and love, Jesus the Christ. And while their worldly gifts of gold, frankincense and myrrh, symbolized divine importance of the birth of this child, the true gifts of the magi were these: hope, time and faith.


The gift of hope.  Hope that their emptiness of spirit would be filled when they reached their journey’s end.  Hope that spurred them to action; to risk all material wealth and seek the most important gift of a lifetime.


The gift of faith; faith that their journey would lead them to the truth, the light of the world. And it did.
May you have the wondrous opportunity to exchange gifts, to realize that all you need is already with you - hope, time, faith. Let these draw you into the presence (no pun intended) or the True Self, the Image of God Self, the enlightened Mind of Christ, the one who is "The Light of the World."
Epiphany Blessings! Peggy