The Expression of the Divine Feminine. 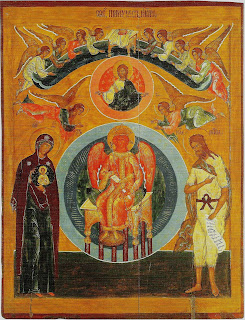 I. Dawn. The Hour of Lauds.

There is in all visible things an invisible fecundity, a dimmed light, a meek namelessness, a hidden whole-ness. This mysterious Unity and Integrity is Wisdom,the Mother of all, Natura naturans. There is in all things an inexhaustible sweetness and purity, a silence that is a fount of action and joy. It rises up in word-less gentleness and flows out to me from the unseen roots of all created being, welcoming me tenderly, saluting me with indescribable humility. This is at once my own being, my own nature, and the Gift of my Creator's Thought and Art within me, speaking as Hagia Sophia, speaking as my sister, Wisdom.

I am awakened, I am born again at the voice of this,
my Sister, sent to me from the depths of the divine
fecundity.

At five-thirty in the morning I am dreaming in a very
quiet room when a soft voice awakens me from my
dream. I am like all mankind awakening from all the
dreams that ever were dreamed in all the nights of the
world. It is like the One Christ awakening in all the
separate selves that ever were separate and isolated
and alone in all the lands of the earth. It is like all minds
coming back together into awareness from all distractions,
cross-purposes and confusions, into unity of love. It is like
the first morning of the world (when Adam, at the sweet voice
of Wisdom awoke from nonentity and knew her), and like the Last
Morning of the world when all the fragments of Adam will return from
death at the voice of Hagia Sophia, and will know where they stand.

Such is the awakening of one man, one morning, at
the voice of a nurse in the hospital. Awakening out
of languor and darkness, out of helplessness, out of
sleep, newly confronting reality and finding it to be
gentleness.

Thus Wisdom cries out to all who will hear (Sapientia
clamitat in plateis) and she cries out particularly
to the little, to the ignorant and the helpless.

Who is more little, who is more poor than the helpless
man who lies asleep in his bed without awareness and
without defense? Who is more trusting than
he who must entrust himself each night to sleep?
What is the reward of his trust? Gentleness comes to
him when he is most helpless and awakens him,
refreshed, beginning to be made whole. Love takes him
by the hand, and opens to him the doors of another
life, another day.

(But he who has defended himself, fought for himself
in sickness, planned for himself, guarded himself, loved
himself alone and watched over his own life all night, is
killed at last by exhaustion. For him there is no newness.
Everything is stale and old.)

When the helpless one awakens strong as the voice of
mercy, it is as if Life his Sister, as if the Blessed Virgin,
(his own flesh, his own sister), as if Nature made wise
by God's Art and Incarnation were to stand over him and
invite him with unutterable sweetness to be awake and to
live. This is what it means to recognize Hagia Sophia.
II. Early Morning. The Hour of Prime.

We do not hear the soft voice, the gentle voice, the
merciful and feminine.

We do not hear mercy, or yielding love, or non-resistance,
or non-reprisal. In her there are no reasons and no answers.
Yet she is the candor of God's light, the expression of His
simplicity.

We do not hear the uncomplaining pardon that bows
down the innocent visages of flowers to the dewy
earth. We do not see the Child who is prisoner in all
the people, and who says nothing. She smiles, for
though they have bound her, she cannot be a prisoner.
Not that she is strong, or clever, but simply that
she does not understand imprisonment.

The helpless one, abandoned to sweet sleep, him the
gentle one will awake: Sophia.

All that is sweet in her tenderness will speak to him
on all sides in everything, without ceasing, and he
will never be the same again. He will have awakened
not to conquest and dark pleasure but to the impeccable
pure simplicity of One consciousness in all and through all:
one Wisdom, one Child, one Meaning, one Sister.

The stars rejoice in their setting, and in the rising of
the Sun. The heavenly lights rejoice in the going
forth of one man to make a new world in the morning,
because he has come out of the confused primordial dark
night into consciousness. He has expressed the clear silence
of Sophia in his own heart. He has become eternal.
III. High Morning. The Hour of Tierce.

The Sun burns in the sky like the Face of God, but
we do not know his countenance as terrible. His light
is diffused in the air and the light of God is diffused
by Hagia Sophia.

We do not see the Blinding One in black emptiness.
He speaks to us gently in ten thousand things, in
which His light is one fullness and one Wisdom.
Thus He shines not on them but from within them.
Such is the loving-kindness of Wisdom.

All the perfections of created things are also in God;
and therefore He is at once Father and Mother. As
Father He stands in solitary might surrounded by
darkness. As Mother His shining is diffused, embracing
all His creatures with merciful tenderness and light.
The Diffuse Shining of God is Hagia Sophia.
We call her His "glory." In Sophia His power is
experienced only as mercy and as love.

(When the recluses of fourteenth-century
heard their Church Bells and looked out upon the
wolds and fens under a kind sky, they spoke in their
hearts to "Jesus our Mother." It was Sophia that had
awakened in their childlike hearts.)

Perhaps in a certain very primitive aspect Sophia is
the unknown, the dark, the nameless Ousia. Perhaps
she is even the Divine Nature, One in Father, Son, and
Holy Ghost. And perhaps she is in infinite light unmanifest,
not even waiting to be known as Light. This I do not know.
Out of the silence Light is spoken. We do not hear it or see
it until it is spoken.

Now the Wisdom of God, Sophia, comes forth, reaching
from "end to end mightily." She wills to be also
the unseen pivot of all nature, the center and significance
of all the light that is in all and for all. That which is poorest
and humblest, that which is most hidden in all things is
nevertheless most obvious in them, and quite manifest, for it
is their own self that stands before us, naked and without care.

Sophia, the feminine child, is playing in the world,
obvious and unseen, playing at all times before the Creator.
Her delights are to be with the children of men. She is their sister.
The core of life that exists in all things is tenderness, mercy, virginity
the Light, the Life considered as passive, as received, as given, as
taken, as inexhaustibly renewed by the Gift of God. Sophia is
Gift, is Spirit, Donum Dei. She is God-given and God
Himself as Gift. God as all, and God reduced to Nothing:
inexhaustible nothingness. Exinanivit semetipsum. Humility as
the source of unfailing light.

Hagia Sophia in all things is the Divine Light reflected in them,
considered as a spontaneous participation, as their invitation
to the Wedding Feast.

Sophia is God's sharing of Himself with creatures. His outporing,
and the Love by which He is given, and known, held and loved.

She is in all things like the air receiving the sunlight. In her
they prosper. In her they glorigy God. In her they rejoice to reflect
Him. In her they are united with him. She is the union between them.
She is the Love that unites them. She is life as communion, life as
thanksgiving, life as praise, life as festival, life as glory.

Because she receives perfectly there is in her no stain.
She is love without blemish, and gratitude without
self-complacency. All things praise her by being themselves
and by sharing in the Wedding Feast. She is the Bride and the
Feast and the Wedding.

The feminine principle in the world is the inexhaustible source
of creative realizations of the Father's glory. She is His
manifestation in radiant splendor! But she remains unseen,
glimpsed only by a few. Sometimes there are none who
know her at all.

Sophia is the mercy of God in us. She is the tenderness
with which the infinitely mysterious power of pardon
turns the darkness of our sins into the light of grace.
She is the inexhaustible fountain of kindness, and would
almost seem to be, in herself, all mercy. So she does in us
a greater work than that of Creation: the work of new being
in grace, the work of pardon, the work of transformation from
brightness to brightness tamquam a Domini Spiritu. She
is in us the yielding and tender counterpart of the power, justice
and creative dynamism of the Father.
IV. Sunset. The Hour of Compline. Salve .

Now the Blessed Virgin Mary is the one created being
who enacts and shows forth in her life all that is hidden in Sophia.
Because of this she can be said to be a personal manifestation
of Sophia, Who in God is Ousia rather than Person.

Natura in Mary becomes pure Mother. In her, Natura
is as she was from the origin from her divine birth. In Mary Natura
is all wise and is manifested as an all-prudent, all-loving, all-pure person:
not a Creator, and not a Redeemer, but perfect Creature, perfectly
Redeemed, the fruit of all God's great power, the perfect expression
of wisdom in mercy.

It is she, it is Mary, Sophia, who in sadness and joy, with the full awareness
of what she is doing, sets upon the Second Person, the Logos, a crown
which is His Human Nature. Thus her consent opens the door of created
nature, of time, of history, to the Word of God.

God enters into His creation. Through her wise answer, through her obedient
understanding, through the sweet yielding consent of Sophia, God enters
without publicity into the city of rapacious men.

She crowns Him not with what is glorious, but with
what is greater than glory: the one thing greater than
glory is weakness, nothingness, poverty.

She sends the infinitely Rich and Powerful One forth
as poor and helpless, in His mission of inexpressible
mercy, to die for us on the Cross.

The shadows fall. The stars appear. The birds begin to sleep.
Night embraces the silent half of the earth. A vagrant, a destitute
wanderer with dusty feet, finds his way down a new road. A
homeless God, lost in the night, without papers, without
identifications, without even a number, a frail expendable exile
lies down in desolation under the sweet stars of the world and
entrusts Himself to sleep.

Posted by ecumenicus at 5:39 AM